Production is scheduled to start in 2013, in line with the Euro 6 emissions milestone, but details cannot be announced until the new engines are unveiled. Concentric is currently working on variable flow oil and water pumps (VFP), which use significantly less power and fuel than conventional fixed flow pumps, as well as optimized fuel transfer pumps.  Although the new customers have their headquarters in Europe, their products will be sold worldwide.

Brendan Quill, Sales Director for Concentric Engine Products, commented: “Concentric was the first company to introduce truly robust, efficient and economical variable flow technologies and we have been collaborating with major OEMs around the globe for some time now.  We are very happy that our work will now help to deliver major improvements in the next generation of engines, not only in terms of their functional performance but also in terms of a real enhancement of environmental performance.  It endorses the work we have already done and is encouraging in terms of the investment we are making in other new “green” technologies, such as Alfdex and Varivent.” 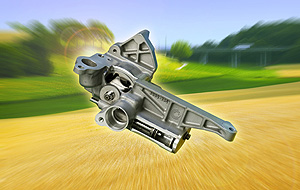